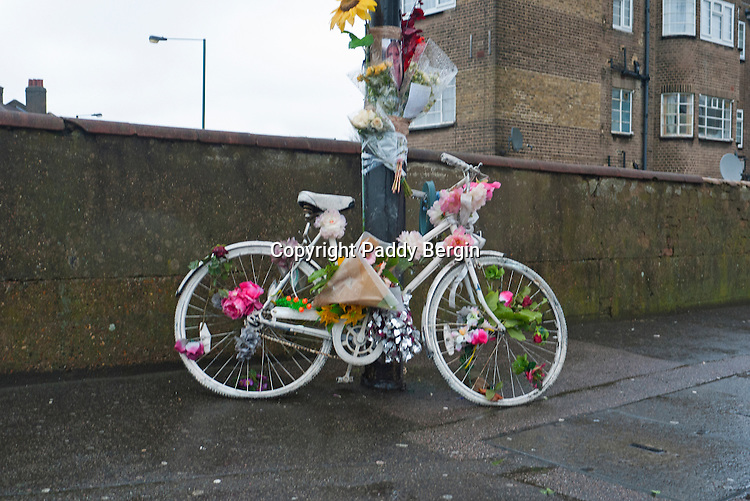 A ghost bike (also referred to as a ghostcycle or WhiteCycle) is a bicycle roadside memorial, placed where a cyclist has been killed or severely injured, usually by a motor vehicle.

Apart from being a memorial, it is usually intended as a reminder to passing motorists to share the road. Ghost bikes are usually junk bicycles painted white, sometimes with a placard attached, and locked to a suitable object close to the scene of the accident. They are also sometimes stripped of their tires, to deter theft.

According to The Guardian, the first recorded ghost bike was in St. Louis, Missouri, in 2003. A witness to a collision between a cyclist and a car placed a painted bike at the location with a message that read: "Cyclist struck here".

The original idea of painting bikes white reportedly goes back to the city of Amsterdam in the 1960s as an anarchist project to liberate two-wheel transport—white bikes were free, help yourself and then leave it for someone else.

The ghost bike idea in the United States may have originated with a project by San Francisco artist Jo Slota, begun in April 2002. This was a purely artistic endeavour. Slota was intrigued by the abandoned bicycles that he found around the city, locked up but stripped of useful parts. He began painting them white, and posted photographs on his website, ghostbike.net. As the idea was taken up for different purposes, Slota faced a dilemma. San Francisco is one of the safer U.S. cities for bicyclists, but memorial ghost bikes sprang up there as elsewhere, changing perceptions of his project.