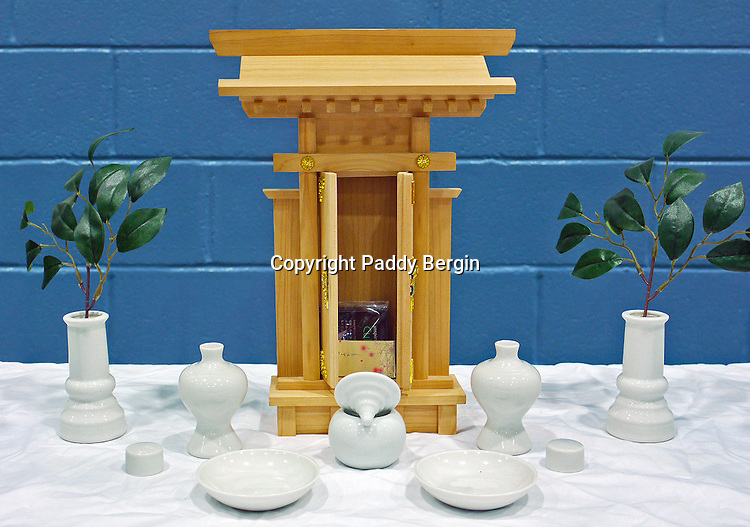 Kamiza is the Japanese language term referring to the "top seat" within a room, meaning the place of honour.

This picture was taken in May 2015 at an Aikido Seminar in Birmingham, UK. It featured Shigemi Inagaki Shihan who is one of the few people left alive who was a student of O Sensei, Morihei Uyeshiba, the founder of Aikido.

Shigemi Inagaki Shihan is probably the greatest exponent of Aikido in the world today.

In the dojo (training halls) of many Japanese martial arts, the kamiza is the location of a small Shinto shrine which is called a kamidana.

A Shinto shrine (神社 shinsha, meaning: "place of the god" is a structure whose main purpose is to house ("enshrine") one or more Shinto kami. Its most important building is used for the safekeeping of sacred objects, and not for worship.

Kami are the spirits or phenomena that are worshipped in the religion of Shinto. They are elements in nature, animals, creationary forces in the universe, as well as spirits of the revered deceased.

Structurally, a Shinto shrine is usually characterised by the presence of a honden or sanctuary, where the kami is enshrined.

In Shinto, Kami are not separate from nature, but are of nature, possessing positive and negative, good and evil characteristics. They are manifestations of musubi the interconnecting energy of the universe, and are considered exemplary of what humanity should strive towards. Kami are believed to be “hidden” from this world, and inhabit a complementary existence that mirrors our own, shinkai [the world of the Kami]. To be in harmony with the awe inspiring aspects of nature is to be conscious of kannagara no michi [the way of the Kami].

Though the word Kami is translated in multiple ways into English, no one English word expresses its full meaning. In this way, the ambiguity of the meaning of Kami is necessary, as it conveys the ambiguous nature of Kami themselves.