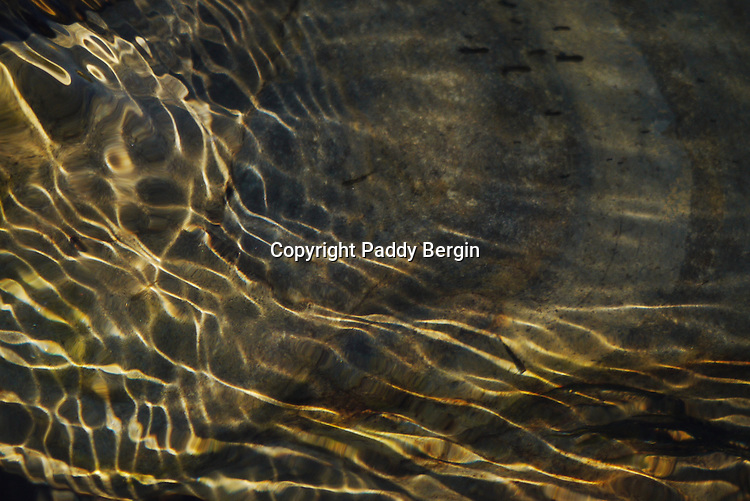 This series of photographs were taken in the Ystwyth River which runs west along the Ystwyth Valley and emerges into the sea at the seaside town of Aberystwyth. The photos were made in the summer at around midday when the sun was overhead and the water was running low. I have been back many times and although I was able to get similar pictures I have never been able to reproduce such beautiful photos. The conditions must be exactly the same and nature is rarely really that obliging. So I guess they are unique. The patterns are created by using the right shutter speed which captures, but does not freeze the movement of the water so when I was taking them I never knew what exactly I would get. It took a lot of experimenting until I had a perfect, for me, combination of circumstances.

Sometimes when I returned to the river to take more photos, even though it was the same time of year and same time of day with the sun shining at the same angle, the water was a slightly darker colour which is caused by silt being washed off the hills and so the colours in the photos were muddy and never came out as intense as in these shots. I go back each year and keep trying. Stock Photo by Paddy Bergin
Paddy Bergin
Patterns, water, sunlight, animal like, photo art, light, rocks, River Ystwyth, Ceredigion, Aberystwyth, West Wales, textile patterns, abstract design, photo wall, art, restaurants, hotels, corporates, corporate buildings, offices, marketing, corporate manuals, flyers, marketing