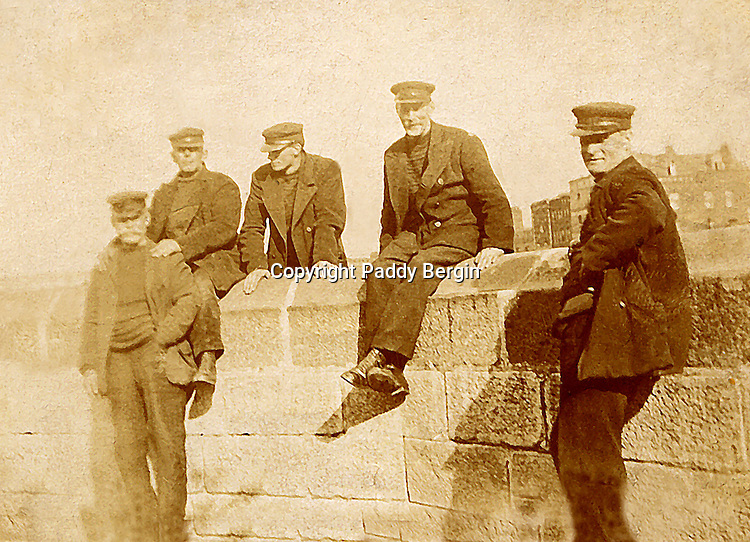 A group of Guinness Barge Masters at the North Wall of the River Liffey in Dublin about 1925.

Guinness is an Irish dry stout that originated in the brewery of Arthur Guinness (1725–1803) at St. James's Gate, Dublin. Guinness is one of the most successful beer brands worldwide. It is brewed in almost 60 countries and is available in over 120. Annual sales total 850 million litres (1.5 billion Imperial or 1.8 billion US pints).

A feature of the product is the burnt flavour that is derived from roasted unmalted barley, although this is a relatively modern development, not becoming part of the grist until the mid-20th century. For many years a portion of aged brew was blended with freshly brewed beer to give a sharp lactic flavour. Although the Guinness palate still features a characteristic "tang", the company has refused to confirm whether this type of blending still occurs. The draught beer's thick, creamy head comes from mixing the beer with nitrogen when poured. It is popular with the Irish both in Ireland and abroad, and, in spite of a decline in consumption since 2001, is still the best-selling alcoholic drink in Ireland where Guinness & Co. makes almost €2 billion annually.

The company has had its headquarters in London from 1932 onwards, due to the Anglo-Irish Trade War. It merged with Grand Metropolitan plc in 1997, and is now part of the British-based multinational alcohol drinks producer Diageo.