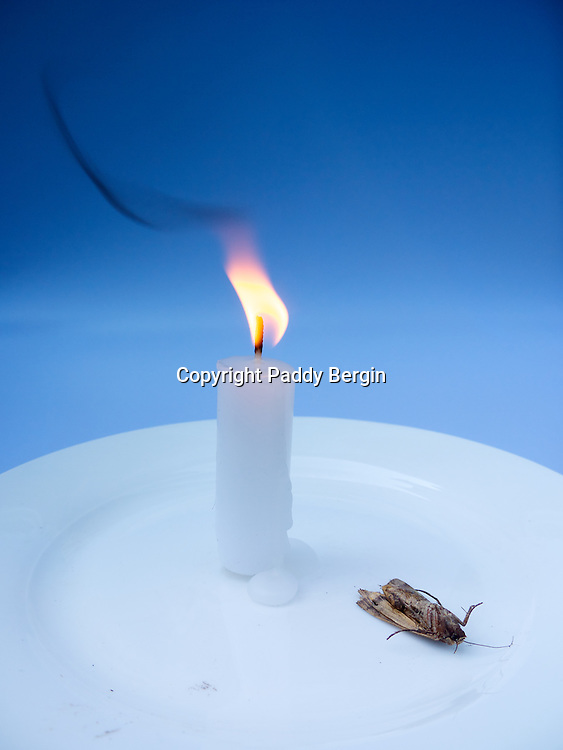 The moth and the candle is a Sufi Fable: "One night the moths gathered together, tormented by the desire to unite themselves with the candle. All of them said: ‘We must find one who can give us some news of that for which we seek so earnestly.

“One of the moths went to a candle afar off and saw within the light of a candle. He came back and told the others what he had seen, and began to describe the candle as intelligently as he was able to do. But the wise moth, who was chief of their assembly, observed: ‘He has no real information to give us of the candle.’

“Another moth visited the candle. He passed close to the light and drew near to it. With his wings, he touched the flames of that which he desired; the heat of the candle drove him back and he was vanquished. He also returned, and revealed something of the mystery, in explaining a little of what union with the candle meant, but the wise moth said to him: ‘Thine explanation is of no more real worth than that of thy comrade.’

“A third moth rose up, intoxicated with love, to hurl himself violently into the flame of the candle. He threw himself forward and stretched out his antennae toward the flame. As he entered completely into its embrace, his members became red like the flame itself. When the wise moth saw from afar that the candle had identified the moth with itself, and had given to it its own light, he said: ‘This moth has accomplished his desire; but he alone comprehends that to which he has attained. None others knows it, and that is all." [Attar’s Fables]